WHITE NATIONALIST AND NAZI SYMPATHIZER IN THE CORVALLIS, OR AREA!

Bartholomew “Bart” Degeneffe is a self-described white nationalist living in Corvallis. He is a close friend of Andrew Oswalt, the well-known Nazi that served on the OSU student government and was charged with a hate crime last year. Bartholomew spends his free time harassing local community members, both online and at protests, as well as sowing the seeds of white nationalism in local conservative groups, including the Three Percenters.

As of June 6th, 2019 Bartholomew works as a night stocker at the Philomath Boulevard Safeway.  Their phone number is (541) 738-2100, in case you’d like to let them know how you feel about their employee (his last name is pronounced “day-jenn-EFF”). 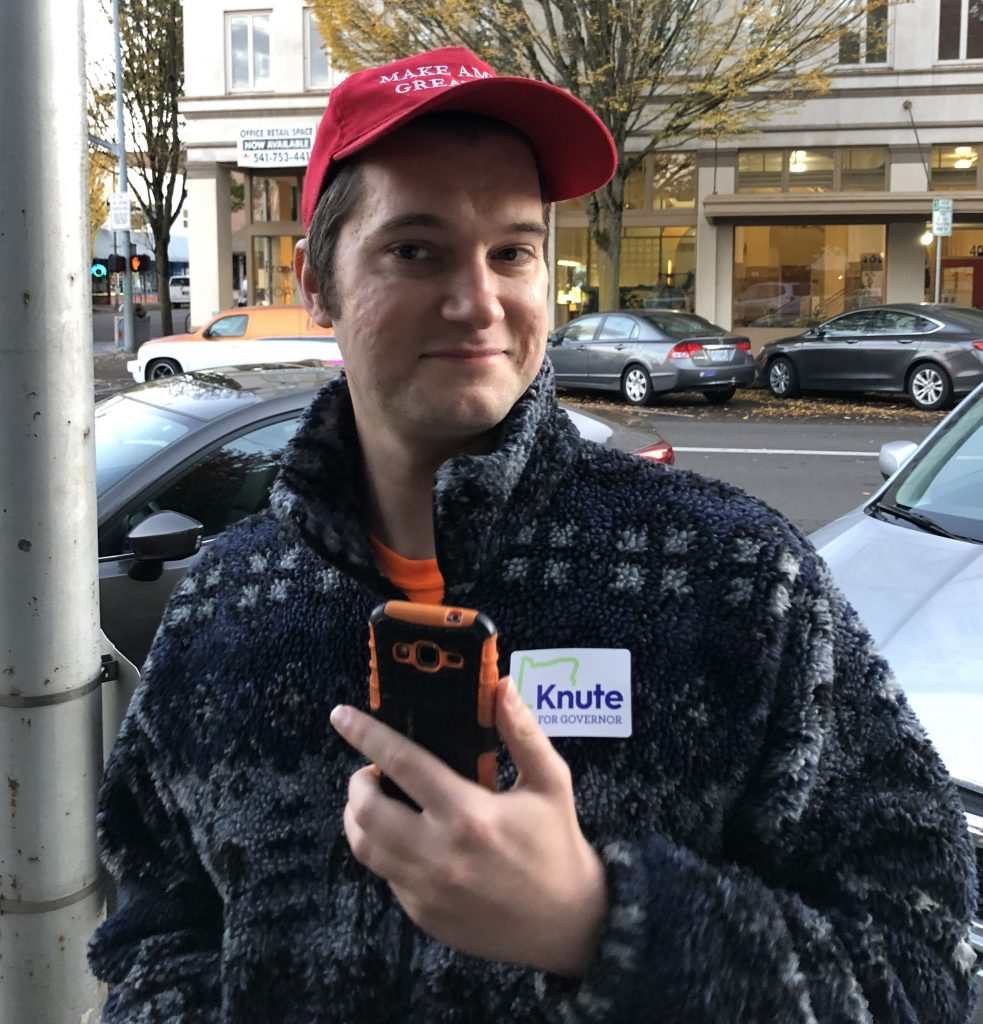 Many Corvallis community members are aware of Bartholmew as a conservative agitator who frequently attends local progressive and leftist events to harass and film participants, including a trans visibility rally and an anti-Kavanaugh protest.  He also enjoys picking fights in OSU newspaper op-eds and community Facebook groups, and was banned from popular group Corvallis People for harassment.  What most Corvallis residents may not know is that Bartholomew is also an outright white nationalist and fascist actively trying to normalize these beliefs by masking them with mainstream conservative rhetoric.

Corvallis Antifa has obtained chat logs from an infiltrator posing as a literal, unapologetic Nazi (referred to in the below logs as “Christian” and “SpiderCraft”) that reveal Bartholomew’s deeply fascist beliefs, his relationship with Andrew Oswalt, and his attempts to radicalize (or “red-pill”) conservatives in the Corvallis community into white nationalists.

What makes Bartholomew so dangerous is that he has successfully integrated himself into the mainstream conservative infrastructure of the Corvallis area despite his radical fascist views. He is a fixture in the various conservative Facebook groups and helps organize regular flag waves and other events. We cannot allow him to poison the discourse within these conservative groups and further normalize white nationalist rhetoric in our community. In this document, we will reveal the true extent of his despicable views in his own words, and provide indisputable proof that his presence within the Corvallis conservative movement is dangerous. 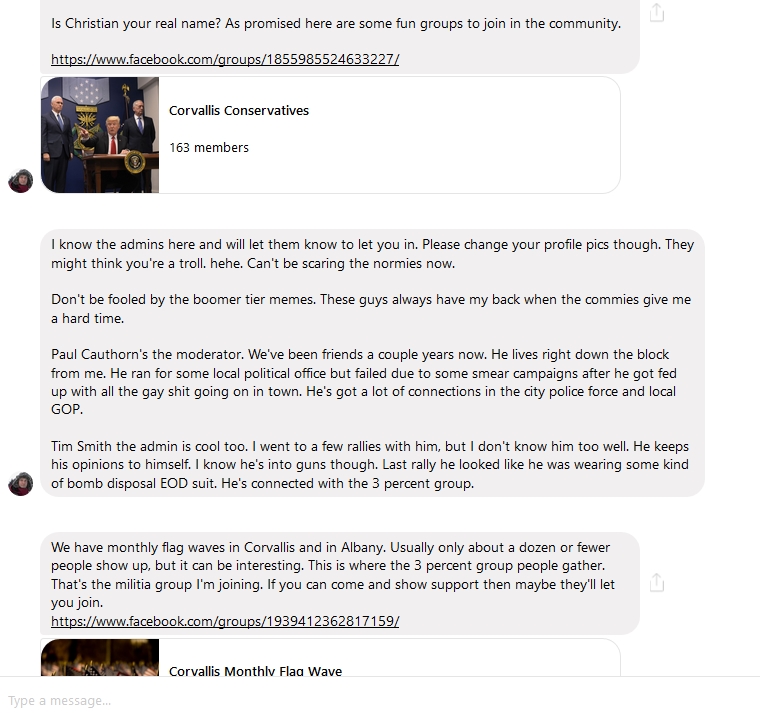 Bartholomew discussing which Facebook groups are most vulnerable to infiltration, as well as disclosing personal info of moderators. 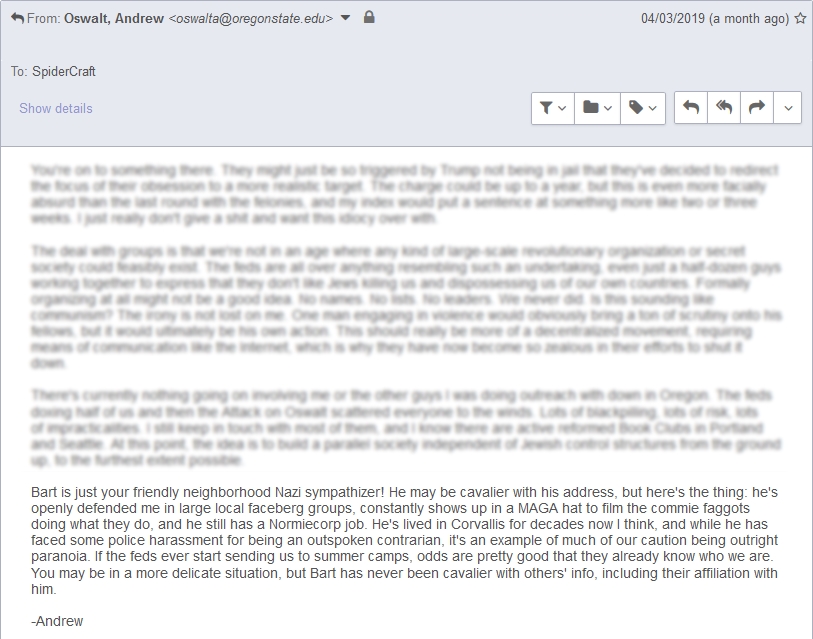 None of this would be cause for alarm if Bartholomew’s actual ideology weren’t as toxic as it is. As you’re about to see, he is a genuine white nationalist and fascist who loathes racial and religious minorities and women and fantasizes about violence. 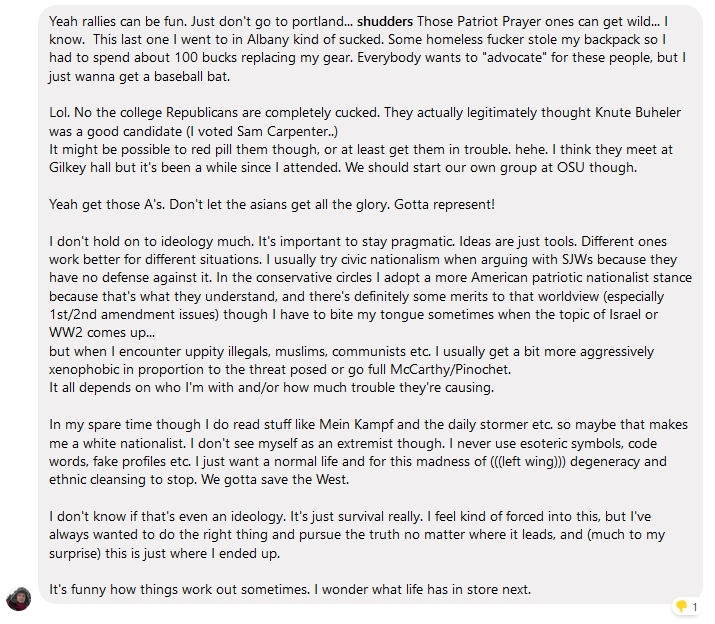 We hope you find the above message as horrifying as we did. In a single message, Bartholomew fantasizes about murdering the homeless, engages in casual racism, praises Pinochet, admits to being a white nationalist and reading Nazi propaganda, and uses the neo-Nazi (((echoes))) meme. More insidiously, he discusses his strategy for shifting his own rhetoric in conservative circles, and mentions doing the same to the OSU Republicans club. This man exists in your social circles and is intentionally employing argumentative strategies to normalize xenophobia, neo-Nazism, and hate. 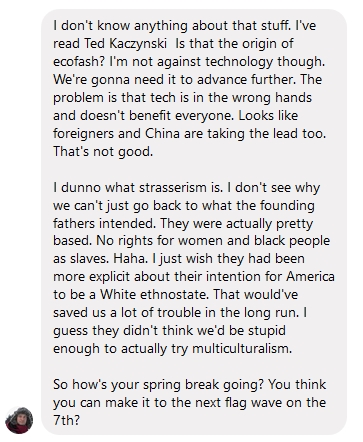 Bartholomew suggests America would be better off if women had no rights and black people were kept as slaves. He also rants against multiculturalism and claims the Founding Fathers wanted America to be a “White ethnostate”. 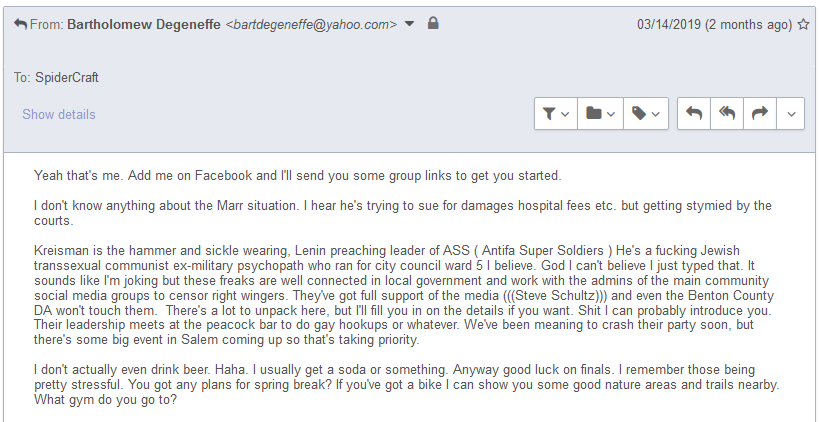 Bartholomew misgenders former city council candidate Paige Kreisman, derides her for being Jewish, and uses “echoes” to imply that community member Steve Schultz is secretly a Jew. (He’s also hilariously wrong about us – Paige no longer lives in Corvallis and had no affiliation with our group, and we didn’t even know who Steve was until we googled him.)

Please join us in rejecting hate in the Corvallis community.  We cannot allow this man to continue to spread his hateful ideology, and we urge you to stop associating with Bartholomew and make it clear that his neo-fascist beliefs are not welcome here.