We are continuing our series of articles revealing members of the American Guard. This article details Sean McCann, the president of the organization’s Utah chapter. Sean lives in Sandy, Utah, with his wife and two young sons.

The American Guard is a group the Anti-Defamation League  describes as “Hardcore White Supremacists”. The organization was founded in Indiana by Brien James, a former Klansman and one of the founders of the violent bonehead (neo-nazi skinhead) gang, Vinlanders Social Club.  The American Guard has deep ties to other open white nationalist gangs like The Hammerskins, The Traditionalist Workers Party, and The Aryan Nations. Unlike many of these other, more overt, groups, they also associate with alt-lite organizations like Patriot Prayer and The Proud Boys. This makes them particularly dangerous, as they are able to bring their extreme views and violence into spaces that typically cater to regular conservatives, who they attempt to further radicalize.

Sean is a high-level member within the American Guard. He attended the group’s 2019 leadership conference in Moore Idaho, at Joshua Long’s ranch. 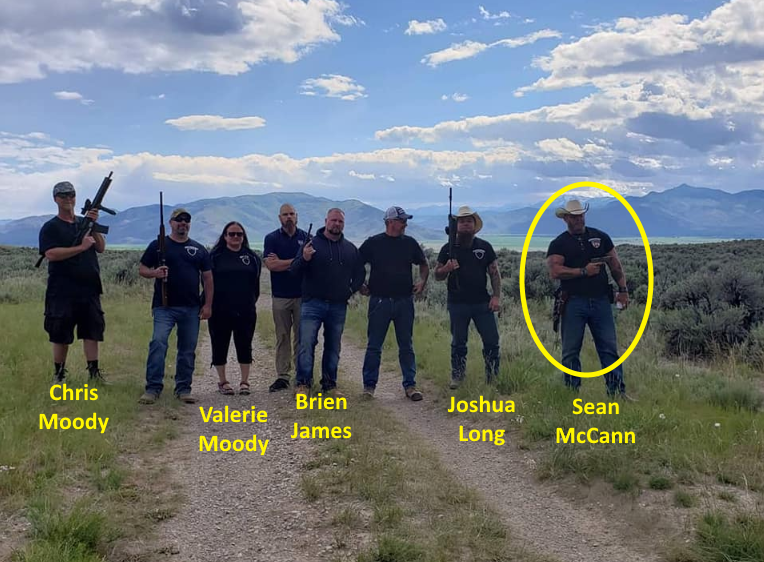 Sean McCann posing with other high ranking members of American Guard, during their leadership convention in July of 2019.

Sean is also close friends with Joshua Long, American Guard’s swastika-tattoo-having vice president, and the subject of one of our recent articles. The two men and their families spend a lot of time together and visit each other with great regularity. 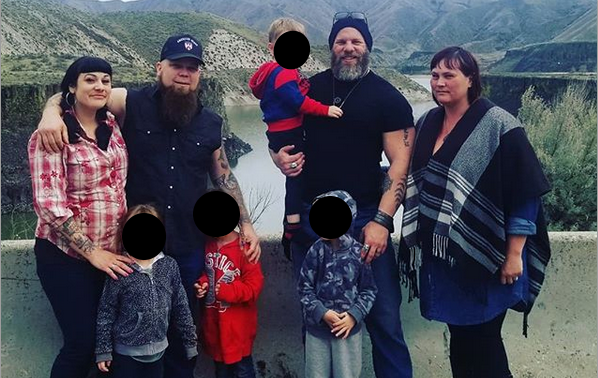 The Longs & McCanns posing together in Idaho.

The pair like each other so much that they even have matching Celtic Cross tattoos. 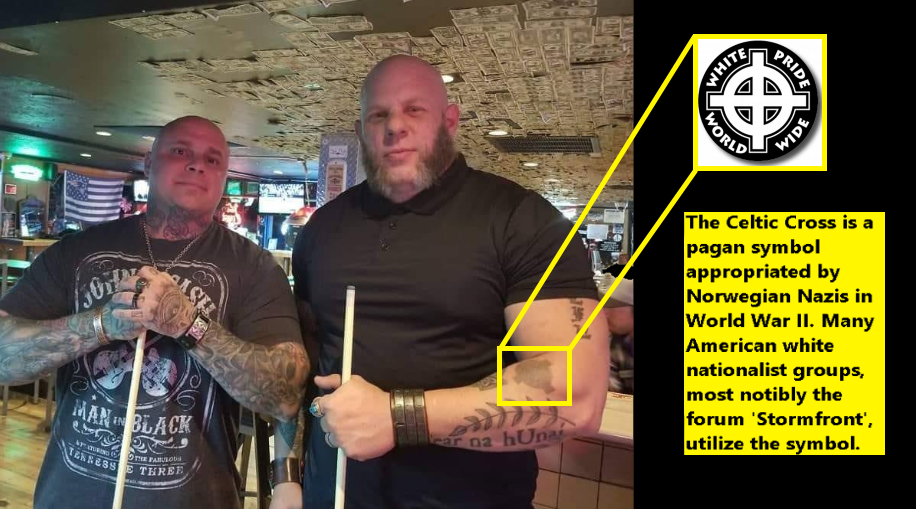 Sean McCann displaying the Celtic Cross tattoo on his left forearm. It should be noted that the other person in this photo is Ryan Hess, a member of Neo-Nazi gang, Crew 41, who once was arrested with a briefcase full of pipe bombs. 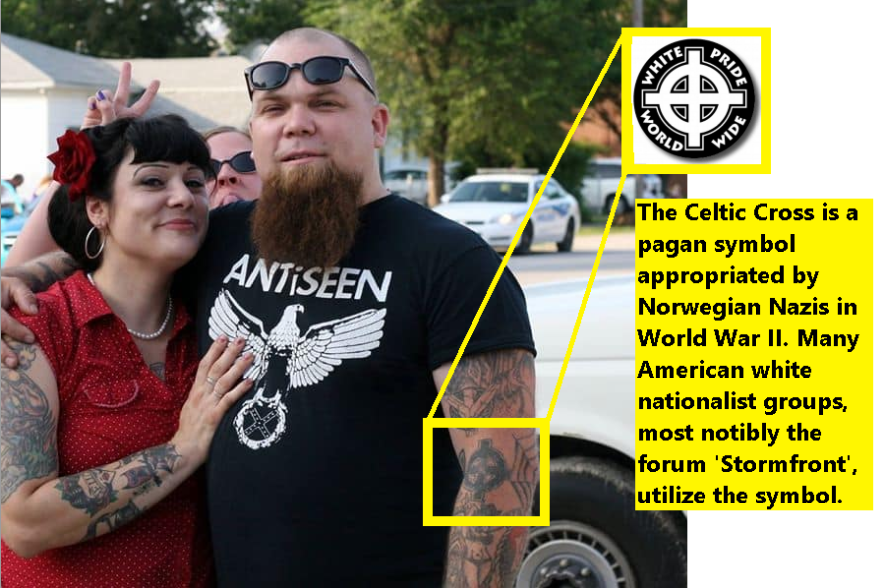 Joshua Long displaying his own Celtic Cross tattoo on his left forearm. This photo was used in our recent article about him.

Like many organizations of its ilk, the American Guard oftentimes claims not be racist or white supremacist in nature or mission. This has been disproved time and time again. From their numerous ties with neo-nazi gangs to their Vice President’s LITERAL SWASTIKA TATTOO, the American Guard does little to hide their true colors. Sean McCann is no different, and he is very public with his own hateful ideology.

In addition to AG, Sean is also a member of The Asatru Folk Assembly, a neo-völkisch pagan organization that the Southern Poverty Law Center defines as a hate group. Asatru is a heathen religion that combines elements of several Scandinavian and Germanic pagan traditions. Not all followers of Asatru are white supremacists, but there are significant portions of the heathen movement that hold such beliefs. The Asatru Folk Assembly is undoubtedly fascist in nature, and restrict their membership to “Aryans” and “Ethnic Europeans”. 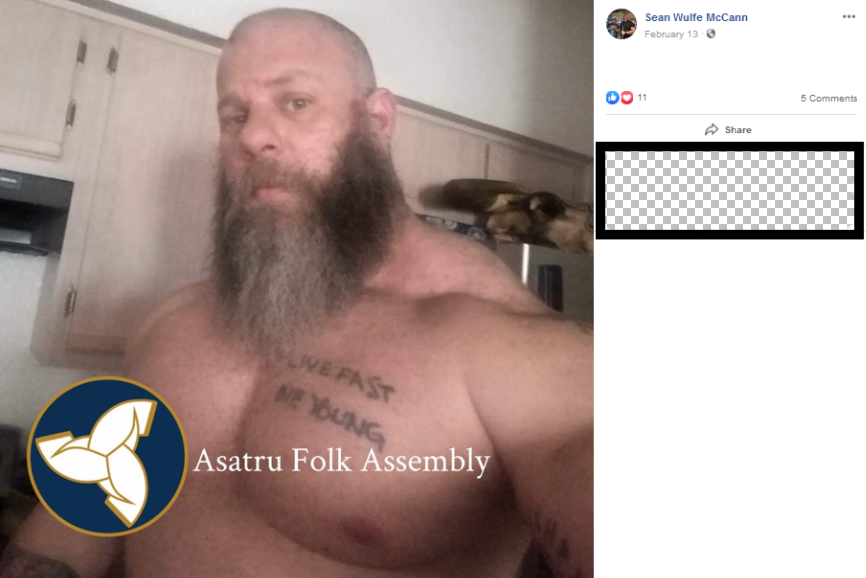 Like many pagan Nazis, Sean has an affinity for the Sonnenrad, or The Black Sun, a runic symbol that has a long history of use by white nationalists. It was adopted by the Nazis during WWII, and has long been used as a substitute for the swastika. 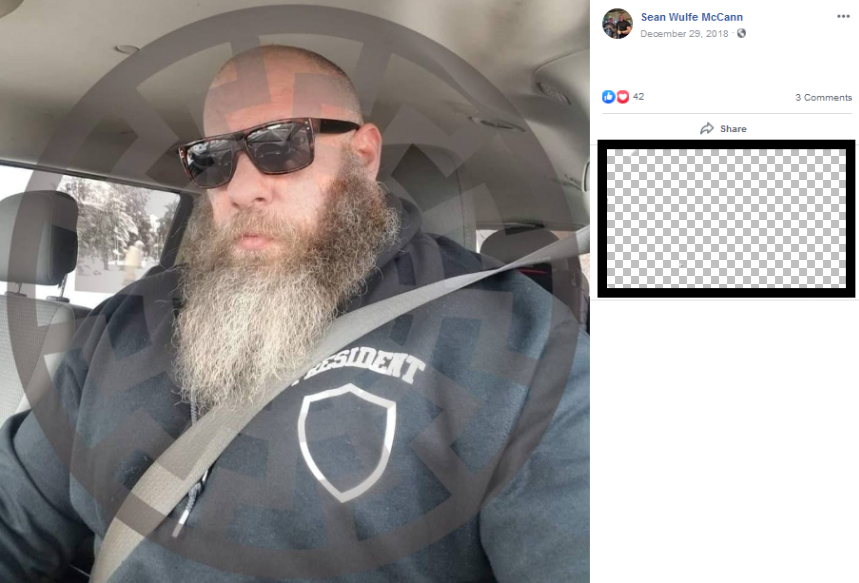 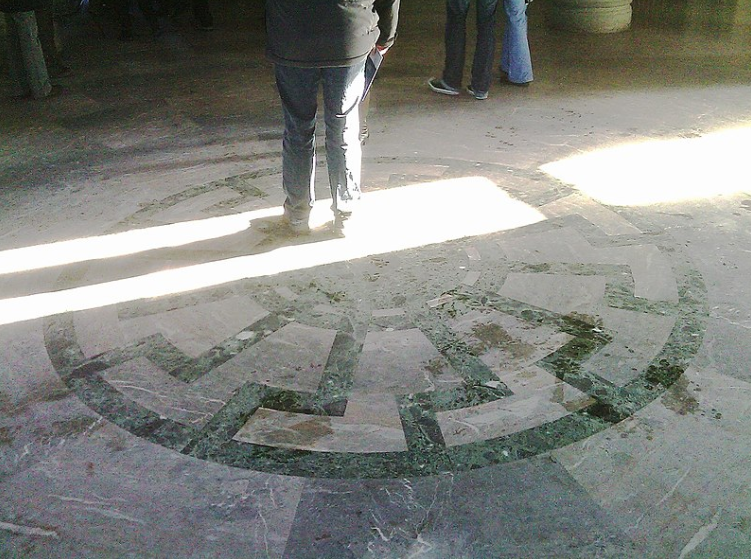 A sonnenrad emblazoned on the floor of the SS General’s hall in Nazi Germany. 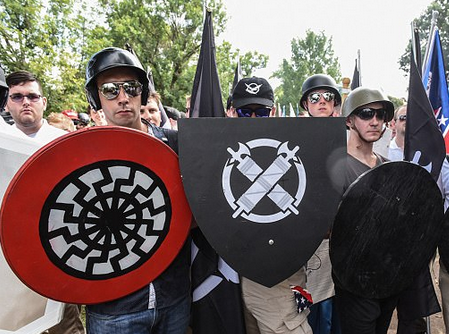 A marcher at Unite The Right carrying a shield painted wth a sonnenrad.

In addition to all of the above, Sean is also a poster of incredibly cringey facebook content. He frequently jokes about white supremacist and anti-Semitic topics. 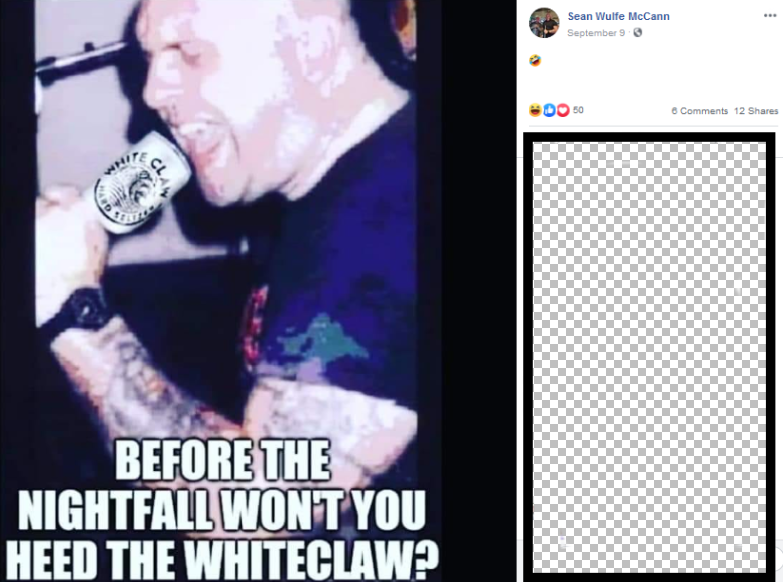 This meme depicts Ian Stuart Donaldson, singer of the openly Neo-Nazi oi! band, Skrewdriver. The text on the image is a parody of the lyrics for Skrewdriver’s song ‘Before The Night Falls’. The song’s actual lyrics read, “Before the night falls, heed the white call”.

Here are some more screenshots that show Sean making jokes about the Holocaust. 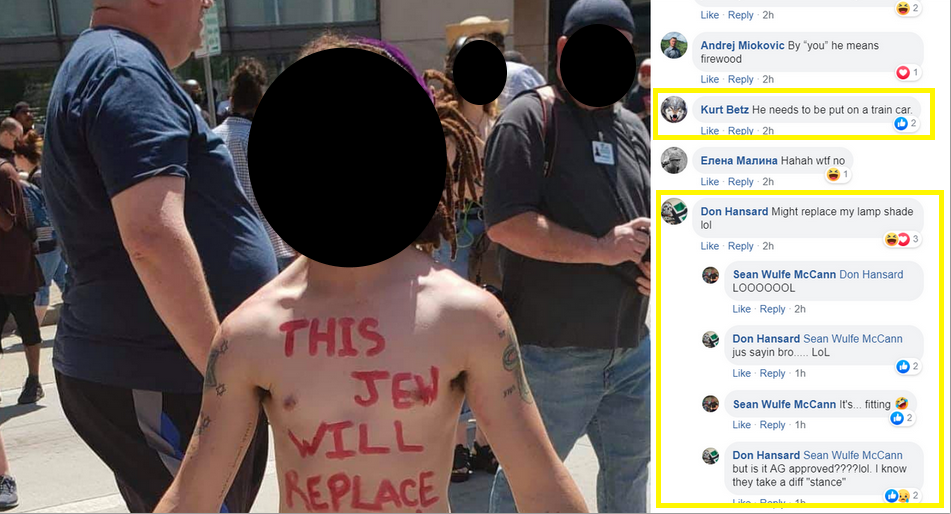 Sean joking about making lampshades out of the skin of a Jewish person. One of the other commenters cautions Sean not to express any views that might go against American Guard’s sanitized public image. 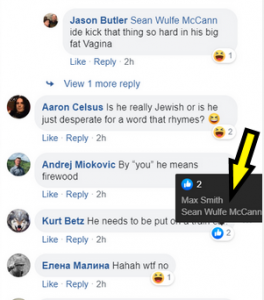 Sean liking a comment joking about putting Jewish people on trains, a reference to the holocaust. 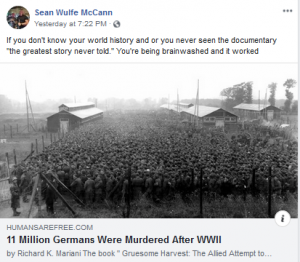 Sean describing the Mormon church as ‘cucks’ for suggesting that members not be cruel to gay people.

This following meme isn’t particularly heinous. We just thought it was funny considering… 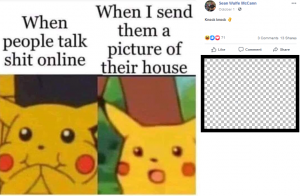 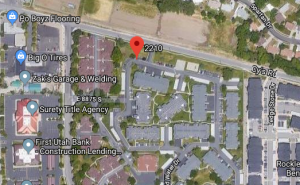 Sean is married to Rebecca McCann. She is a new-age “lightworker” and realtor. She generally does not express far-right views online. However, she wears a Mjölnir pendant, which suggests she shares her husband’s hateful, religious, views. The Mjölnir, or Thor’s hammer, is a symbol used by many neo-pagans. It is NOT an explicitly racist or fascist symbol. However, it is used by many white supremacists who practice pagan religions. 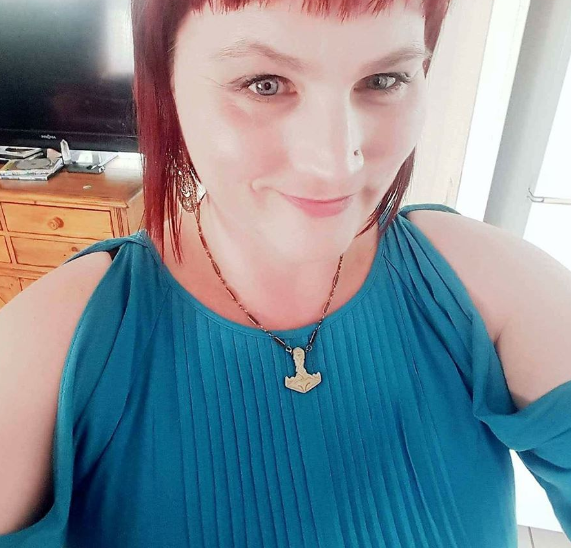 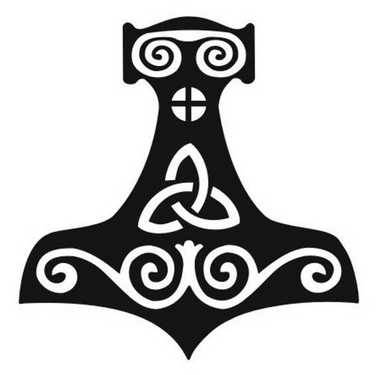 Depictions of Mjölnir vary widely, but this is among the most common. 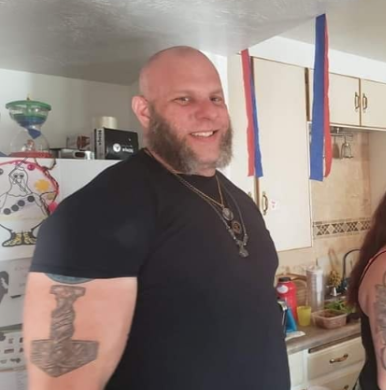 When he isn’t busy being a Nazi or working for Nationwide Energy Utah , Sean trains as a bodybuilder at Ironground Gym. He and the rest of American are dangerous, and should be treated with extreme caution.

More information about Sean & Rebecca McCann can be found HERE

This is the third article in our #GarenCollinsMemorialDox series. The other two can be found Here (Joshua Long) and Here (Valerie & Chris Moody). Garen Collins was an American Guard member from Michigan, who passed away this June. By dying cold and alone in the woods, Garen did more good for the world than he ever did while alive. For this, we honor him. May all his compatriots meet the same fate. 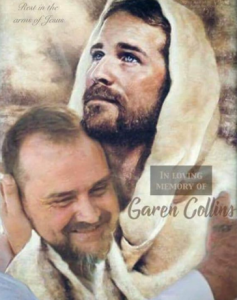