On Sunday 4/11, White Nationalists are expected to mobilize in a “White Lives Matter” march in several cities across the country. This event was organized on Telegram and was widely circulated in White Supremacist circles on beginning in late March. We have obtained logs from the, “ADMINS OF WLM ZONE” chat, where individual march leaders coordinated and planned their actions.We are sharing these logs with interested journalists and activists. If you would like access to them, please email us at cvantifa@riseup.net and offer a brief explanation of who you are and why you want access.

This event has been fraught from the beginning. The channels are full with constant bickering and infighting about a wide variety of topics. Foremost among these is optics. The main organizers of the event are very intent on keeping the rallies “optical”. They beg participants to avoid using swastikas and neo-Nazi imagery. In public facing communications, they routinely assert that they are not Nazis and are simply, “normal white people” standing up for what is right.

However, behind closed doors, their actions tell a different story.  In the admin chat, march leaders freely use neo-Nazi symbolism and rhetoric.  The organizer of the Raleigh, NC rally,  “ϟϟRide_The_Bolts ϟϟ” even uses the logo of the National Socialist Order, an Atomwaffen splinter group. The Orange County organizer, “Your Fuhrer” also uses a swastika pfp and appears to be with a group called the, “American National Socialist Party.” 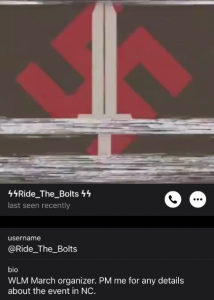 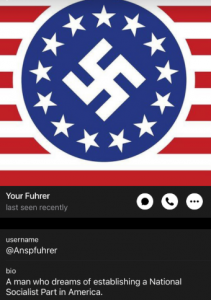 These chats are also thoroughly populated with Proud Boys, which raises significant contention due to the (accurate) perception that the organization is closely tied to0 the Feds. Some in the admin chat express concern that the PBs are not a white enough organization. The leader of the (now cancelled) Western Kansas march , “J.W.” pushes back on this. He claims that he is the leader of a PB chapter and that his chapter is, “WHITE only.” 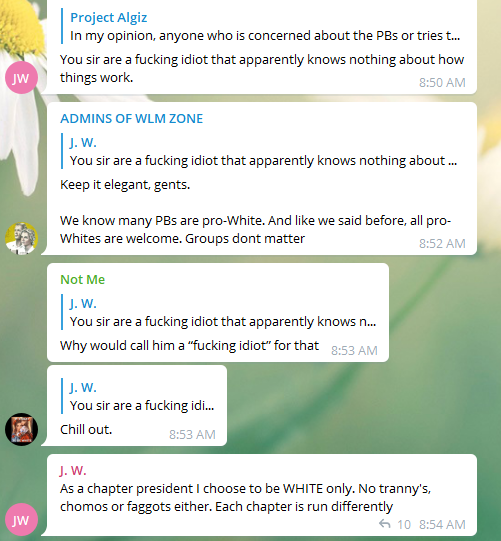 One of the most prevalent posters and admins of the public chat is a Michigan Proud Boy using the name, “Telly Savalas.” He is insistent that the PBs not be mentioned in any organizing channels. He says that his lack of optics got him demoted from his leadership position in his chapter, and that he has been doxed and disciplined at work for his affiliations. If you know who this fella is, shoot us a message, and we’ll be sure to make his life even harder…

EDIT: Telly has been ID’d as Vito Russel from Sterling Heights, MI. 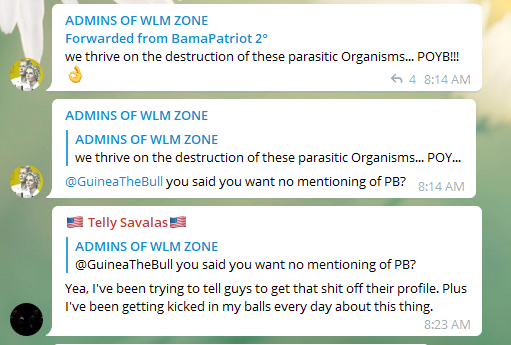 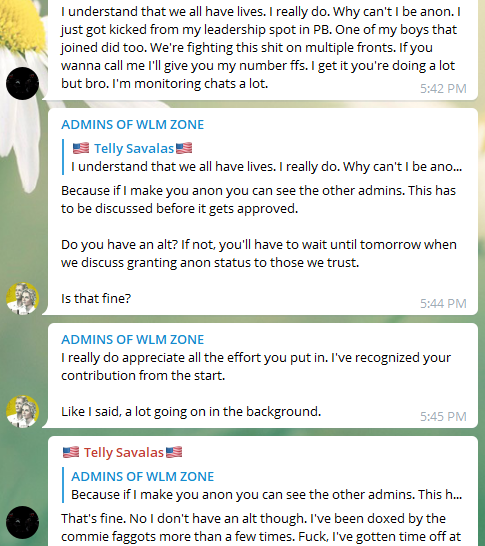 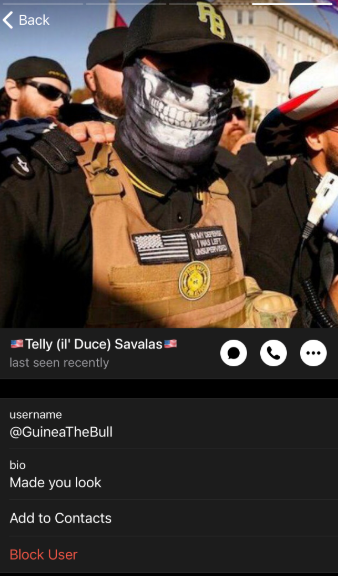 Debating the Proud Boys isn’t the only infighting going on in this chat. Everyone is constantly accusing someone else of being a Fed or Antifa. While we can’t speak to Federal involvement, Antifascists have already done an excellent job infiltrating and disrupting the event. Several channels have already been revealed to be Antifa-run ops, and even more have had members be doxed. Antifascists have been able to gather tremendous amounts of intelligence from this movement, and more will come out of the archived chats. Before this event has even occurred, it’s shoddy opsec and harebrained planning have done tremendous damage to White Nationalist movement.

If you want to help further that damage, request the logs from CVAntifa@riseup.net and get to it!