Kyle Bonham is a Corvallis-based Fascist sympathizer who actively collaborates with neo-Nazis. To understand Kyle, you need to understand his roommate, Benjamin Baker. Ben is a neo-Nazi Proud Boy with a history of extreme violence. We have posted two articles about Baker in the past that can be found here and here. 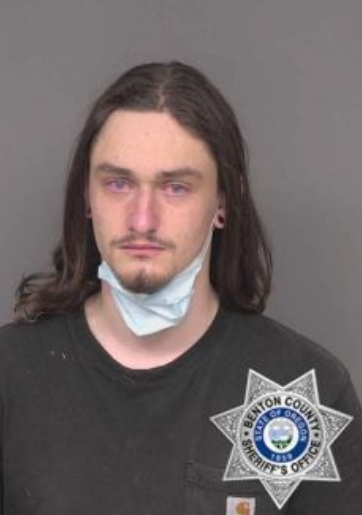 We first documented Kyle collaborating with Ben in the spring of 2020, when the pair attempted to harass and intimidate a Black Lives Matter protest outside of Benton County Courthouse on 5/31/20. Individuals in the crowd recognized Ben from his history of child abuse, and promptly kicked the pair out of the rally.

The two attempted a similar stunt in front of the city hall on 7/29/21 during a sleep-in protest held by Corvallis Housing First, a housing advocate group.  The protest was done in solidarity with the unhoused community in Corvallis, who have been subject to a brutal regime of sweeps at the hands of the city government and ODOT. During their stunt, Ben proudly carried the, “No Quarter Flag.” The website that sold them this flag describes it as “signify[ing] that no quarter will be given. When translated into modern language, this means that captured enemy combatants will be killed rather than taken prisoner.” 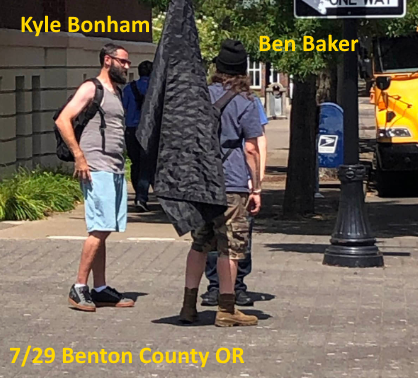 Last year, Ben was arrested after an altercation downtown where he fired his gun, likely with the intent of murdering someone. He is still on trial and his next court date is in December. Ben was disarmed and detained by heroic bystanders, but we suggest that anyone who interacts with him treat him as though he is armed and dangerous.

Like many of his fashy ilk, Kyle has a long history of domestic violence. He was arrested and found guilty of strangling and beating his girlfriend in 2010, and later violating a restraining order against him. He has repeatedly caught charges for harassment and violating his probation. 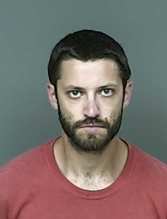 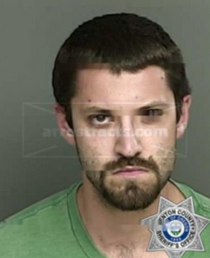 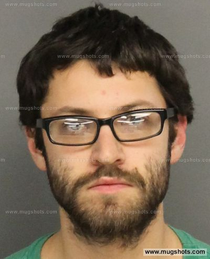 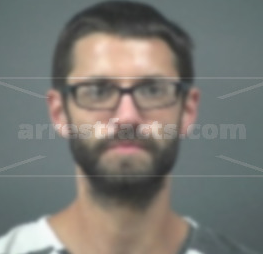 The many faces of Kyle Bonham

Kyle constantly posts creepy stalker shit about his ex on Facebook. He also makes frequent posts about how he’s a deadbeat dad who isn’t allowed to see his kids and how lonely he constantly is. Maybe if Kyle wanted to be a better parent, he wouldn’t live with Ben Baker, who literally petitioned the state of Oregon to allow him to date a child in which he discussed his sexual fantasies with said minor.

(there’s wayyyy more of this, but most of it includes personal details we will not share here) 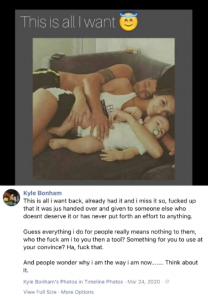 Kyle posting about beating his children: 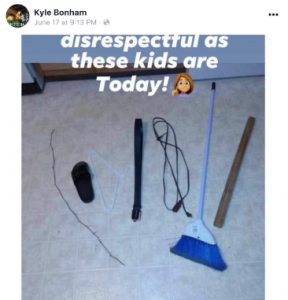 Ben and Kyle first began engaging with Corvallis’ graffiti scene in May when Ben sent us an email threatening the lives of two trans graffiti writers. Despite insinuations from the Fash, we want to make it clear that these individuals are not in any way associated with CVAntifa. We have since gotten in touch with the artists to discuss the threats to their safety, and per request, we will be censoring their names in this piece.

We just got this email from local pedophile neo-Nazi Ben Baker threatening two local writers (who we don't know FYI).

We recommend keeping an eye out for Ben when out at night. He recently tried to shoot someone during an altercation. pic.twitter.com/PC7bV4Fy3w

It was around the time of the initial email when we started noticing another one of Ben’s collaborators, Bartholomew Degeneffe, sticking up pictures of his face over these writers’ tags and stickers. Bart is a white supremacist who we exposed attempting it infiltrate and “Redpill” Corvallis conservative circles. We have published two separate articles about Bartholomew that can be found here and here. Bart and Ben both work stocking food at the Philomath Boulevard Safeway. 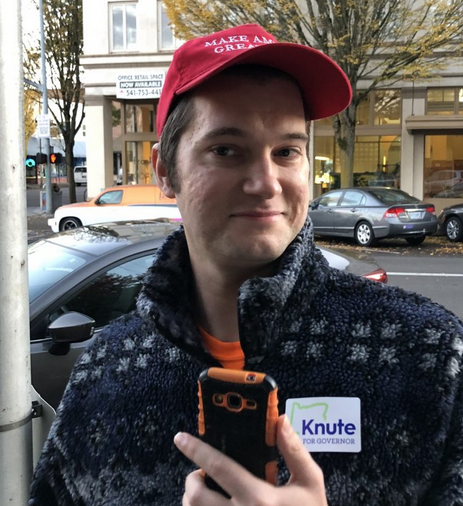 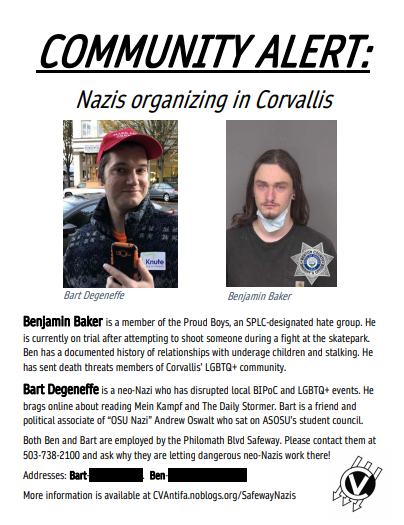 A flyer that went up regarding Ben and Bart

The paper stickers Bart uses originate from his workplace. Since the beginning of the pandemic, Safeway has been using a system of paper adhesive nametags to clock employees in and out. When workers clock in, they have their picture taken and their temperature checked. This information is put on an adhesive name tag they then wear to work. Bart rips the corners with his face off of these nametags and sticks them up along with racist slurs. 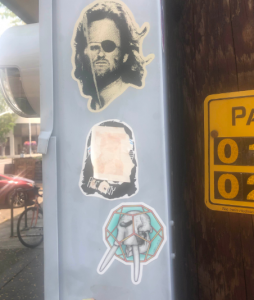 These stickers fade quickly, so we apologize for the illegibility of this image. It is Bart’s face pasted over another sticker with individual letters cut out to make it read, “Ape Goy” 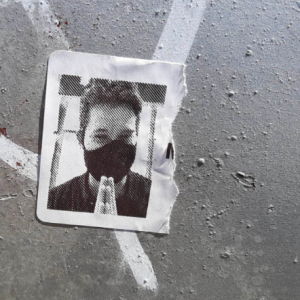 We began seeing swastika stencil graffiti pop up in town around August of this year. The first instances we documented were at the 900 block of NW Hayes and Corvallis High School, both within a few blocks of the apartment Ben and Kyle share. The graffiti has gradually become more widespread, however it is primarily centered around Ben and Kyle’s apartment and Bart Degeneffe’s house near downtown.

In the last few days, we have received several reports of Nazi stencil graffiti popping up in north Corvallis.

If you see any of this trash, don’t hesitate to contact us.

The below instances were found at the 900 block of NW Hayes and at Corvallis High School. pic.twitter.com/5Nq9oa0bmU

The Swastikas started popping up right around same time Ben’s public rhetoric made a sharp turn to overt Nazism. Ben has flirted with neo-Nazi ideology for years, but has typically claimed in public that he is simply an American patriot. However, starting in late August, he began making TikToks advocating for Adolph Hitler and suggesting his followers read Mein Kampf and The Protocols of The Elders of Zion.

Ben has recently made a hardcore turn towards open Nazism and is currently advocating that people read Mein Kampf on his Tik Tok account. pic.twitter.com/5AlVQmsQoY

Another large piece reading, “Better Dead than RED” with two swastikas was found in front of the Philomath Boulevard Bi-Mart which is in Sunset Shopping Center, the same complex as the Safeway where both Ben and Bart work. Next to this piece was a sticker for the neo-Nazi group Patriot Front. A sticker for the group was also found posted along with one of Bart’s face nametags downtown, indicating that he is likely prospecting for the group or collaborating with its members. 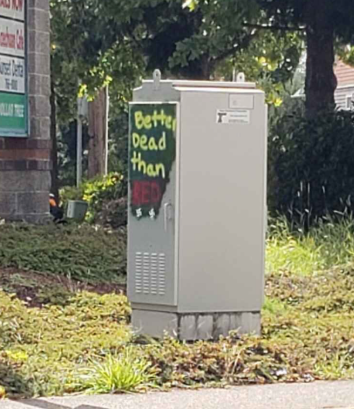 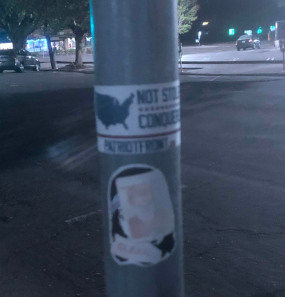 We have also documented the swastika-writers using the same distinctive colors of green and yellow paint in the same shitty handwriting to harass one of the writers threatened by Ben’s initial email. These specific colors of paint have not been documented being used by other local writers, which suggests this piece can be specifically tied to Ben and the rest of his friends, and not another graffiti beef. 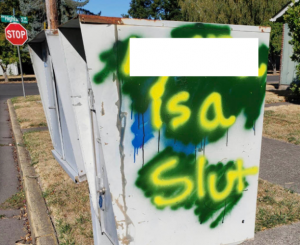 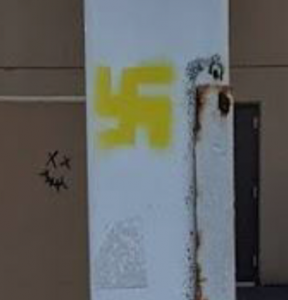 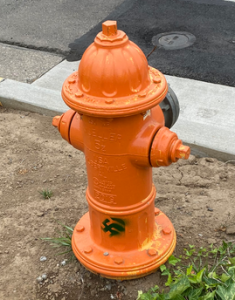 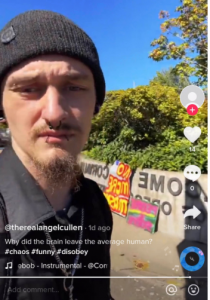 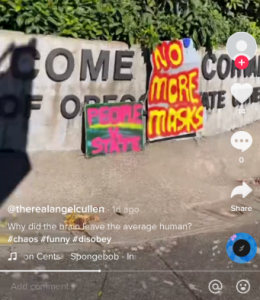 On 9/15/21 the Corvallis Advocate published an article regarding this graffiti. In it they also reference that the people behind it have also defaced Stop Line 3 signs. On 7/18 Ben made a TikTok claiming that he has taken some of these signs, and planned to sell them off. This is further proof of connection between himself and the graffiti. 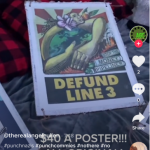 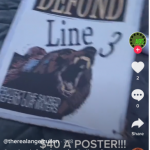 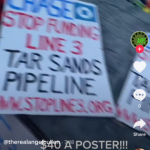 This isn’t important for the point we’re making, but the same TikTok features Kyle stanced up like an absolute jackass in front of a Confederate flag. 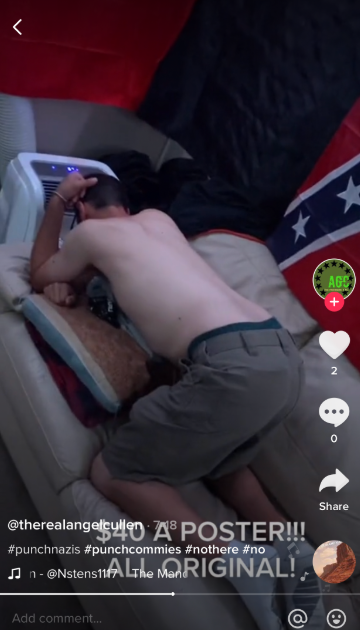 Given all of this evidence. It is pretty clear that Kyle, Benjamin, and Bartholomew are associated with this rash of racist bullshit. We highly suggest concerned individuals contact all of their employers to let them know about their hateful activities. Links at end!

We reject the Advocate article’s framing that the Corvallis Police and city are effectively addressing this problem. They have known about the activities of Ben and Kyle for years, and have allowed them to continue with impunity. Our crew connected the pair to the swastikas on twitter weeks before the article even came out, and they have taken no actions to investigate. At the same time, Antifascists, graffiti writers, and normal residents of Corvallis have been doing more to remove this trash, all the while being criminalized by the State. We want to offer our wholehearted thanks to the local graffiti writers and other comrades who have been taking this garbage down alongside us. The cops and city do not protect our community. We protect us!

The addresses of those referenced in the article can be found here: https://pastebin.com/wdQHdbxH

Kyle Bonham is currently employed as a Fuel lead at the Fred Meyer gas station on 9th. Call 541 753 4319 to let them know they are employing a fascist and domestic abuser.

Benjamin Baker and Bart Degeneffe are employed by the Safeway on Philomath Boulevard. Call 541 738 2100 to let them know they are employing Nazis.

Contact Fred Reynolds from the Sunset Shopping Center and let him know that his property is being defaced by Safeway employees: 541 325 4409