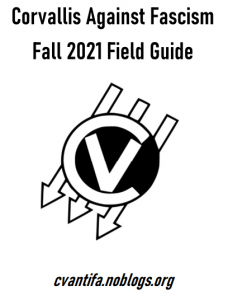 We are pleased to announce our crew’s first ever zine! If you would like copies to distribute locally, reach out to us at cvantifa@riseup.net. Print copies can be found in the Corvallis Zine Library located in the red room in Interzone.

Printable PDFs can be obtained by emailing us at cvantifa@riseup.net

ALT text for those using screen readers is available at the bottom of this page. 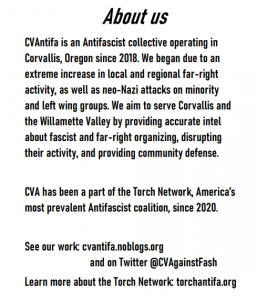 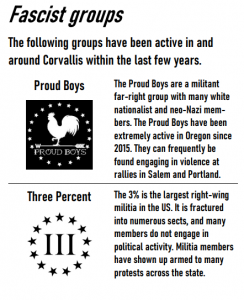 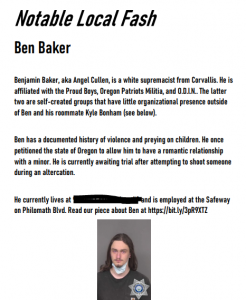 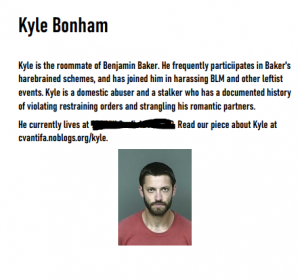 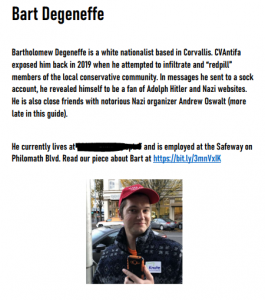 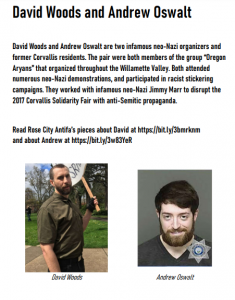 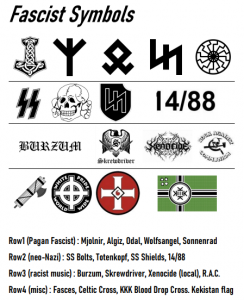 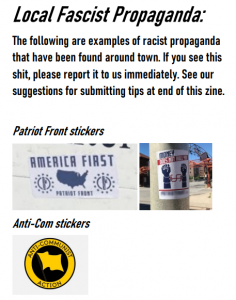 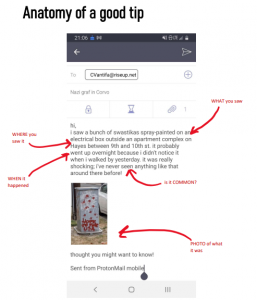 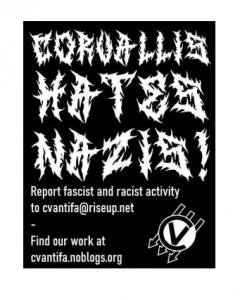 CVAntifa is an Antifascist collective operating in Corvallis, Oregon since 2018. We began due to an extreme increase in local and regional far-right activity, as well as neo-Nazi attacks on minority and left wing groups. We aim to serve Corvallis and the Willamette Valley by providing accurate intel about fascist and far-right organizing, disrupting their activity, and providing community defense.

CVA has been a part of the Torch Network, America’s most prevalent Antifascist coalition, since 2020.

If you see Fascist activity in Corvallis, please don’t hesitate to reach out to us at CVAntifa.riseup.net

This guide exists to give

readers a better understanding of the fascist and racist individuals and groups operating in and around Corvallis. This is not an exhaustive report of local or regional activity, but rather a quick introduction to acclimate those unfamiliar with the situation. If you have any questions about this guide’s content, please contact us.

More information about most of what is listed here can be found at CVAntifa.noblogs.org

The following groups are have been active in and around Corvallis within the last few years.

The Proud Boys are a militant far-right group with many white nationalist and neo-Nazi members. The Proud Boys have been extremely active in Oregon since 2015. They can frequently be found engaging in violence at rallies in Salem and Portland.

The 3% is the largest right-wing militia in the US. It is fractured into numerous sects, and many members do not engage in political activity. Militia members have shown up armed to numerous protests across the state.

Patriot front is a white nationalist group that grew from the ashes of Vanguard America, another neo-Nazi org. The group typically engages by putting up shitty stickers around OSU’s campus. They are not a major physical risk.

OPM / ODIN are passion projects started by local bigot Ben Baker. They have no legitimate street presence, but Ben and friends have made serious threats against locals and showed up to IRL actions.

VEP is a neo-Nazi black metal label run in part by sex offender Paul Bonnen. Paul has also used the names Xenocide and Kulturkampf Productions in his ventures

Benjamin Baker, aka Angel Cullen, is a white supremacist from Corvallis. He is affiliated with the Proud Boys, Oregon Patriots Militia, and O.D.I.N.. The latter two are self-created groups that have little organizational presence outside of Ben and his roommate Kyle Bonham (see below).

Ben has a documented history of violence and preying on children. He once petitioned the state of Oregon to allow him to have a romantic relationship with a minor. He is currently awaiting trial after attempting to shoot someone during an altercation. He currently lives at 970 NW Garfield Ave. #9 and is employed at the Safeway on Philomath Blvd. Read our piece about Ben at https://bit.ly/3pR9XTZ

Kyle is the roommate of Benjamin Baker. He frequently particiipates in Baker’s harebrained schemes, and has joined him in harassing BLM and other leftist events. Kyle is a domestic abuser and a stalker who has a documented history of violating restraining orders and strangling his romantic partners. He currently lives at 970 NW Garfield Ave. #9. Read our piece about Kyle at cvantifa.noblogs.org/kyle.

Bartholomew Degeneffe is a white nationalist based in Corvallis. CVAntifa exposed him back in 2019 when he attempted to infiltrate and “redpill” members of the local conservative community. In messages he sent to a sock account, he revealed himself to be a fan of Adolph Hitler and Nazi websites. He is also close friends with notorious Nazi organizer Andrew Oswalt (more late in this guide). He currently lives at 329 SW 6th St., apt. F and is employed at the Safeway on Philomath Blvd. Read our piece about Bart at https://bit.ly/3mnVxIK

Paul Bonnen is a neo-Nazi pedophile who has lived and organized around the Willamette Valley, but who often stays with his mother on the 1700 block of Menlo Ave. He is affiliated with the NSBM (National Socialist Black Metal) scene. He has played in the bands Xenocide and Immortal Pride. He has also helped run the labels Kulturkampf Productions and Vinland Elite Prodictions.  Bonnen is a 2nd degree sex offender who was convicted of raping a minor after getting them drunk. He drifts from town to town, but can often be found driving and living out of a green minivan with the plates OR – WMD941. Read our piece about Paul at https://bit.ly/3GuAZGL

David Woods and Andrew Oswalt are two infamous neo-Nazi organizers and former Corvallis residents. The pair were both members of the group “Oregon Aryans” that organized throughout the Willamette Valley. Both attended numerous neo-Nazi demonstrations, and participated in racist stickering campaigns. They worked with infamous neo-Nazi Jimmy Marr to disrupt the 2017 Corvallis Solidarity Fair with anti-Semitic propaganda.

[Pictures of the following fascist symbols in rows]

The following are examples of racist propaganda that have been found around town. If you see this shit, please report it to us immediately. See our suggestions for submitting tips at end of this zine.

Anatomy of a good tip:

[Picture of an email addressed to CVA with arrows pointing to different parts of the text detailing different aspects of a good tip: Where you saw it, When it happened, What you saw, is it Common?, Photo]

hi, i saw a bunch of swastikas spray-painted on an elextrical box outside an apartment complex on Hayes between 9th and 10th st. it probably went up overnight because i didnt notice it when i waked by yesterday. it was really shocking; i’ve never seen anything like that around there before

When reporting people, a good acronym to remember is SALUTE

[Picture of an email addressed to CVA with arrows pointing to different parts of the text detailing different aspects of a good tip: Size, Activity, Location, Uniform, Time, Equipment]

hey, im not sure if you’ve already heard about this but right now there’s a guy standing by himself in front of the bi-mart on 9th and circle carrying a sign that says “antifa lets talk” he’s got a handgun on his belt so idk if thats what he’s really looking for. idk who is is cuz he’s got a green bandana on as a mask but you’ll notice him right away; he’s really obvious, wearing camo shorts, some kind of body armor. I was driving but here’s the best pic i could get.

[Picture of Ben Baker doing what was described above]

[Picture of one of our stickers with the following text]

Find our work at cvantifa.noblogs.org